Welcome to the world of football shirts! The following article is the first step on the path of football tricots and knowledge associated with them. An elementary aspect in all domains is their division. Therefore you will start acquiring knowledge from learning different types of football shirts. Let’s go!

The most basic division of football shirts consists of three types – supporter shirt, replica and player issue. Surely the most interesting things for you are characteristics of each type, differences between them and their cost, aren’t they? These are three most common questions for majority of fans who would like to buy a shirt.

It is also called a T-shirt or a Tee jersey. In plain words this shirt is the lowest model of football shirts. It is produced for pattern like a replica or player issue shirt, but the differences between them are easily noticeable. 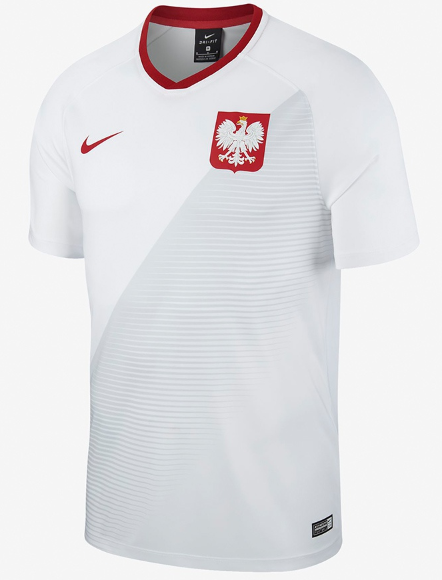 This kind of shirts is characterised by the lowest amount of details and usually is produced in the most basic technology or even without one. You can’t find there any conveniences like lighter material that is fast-drying. This type of shirt is just a T-shirt.

How can you easily recognize a supporter shirt, the lowest model of football tricots? The majority of them have paper label in the collar instead of heat transferred label. You can also spot large differences  between them and replicas or player issue shirts. On the example of Polish national team shirts, they have totally different collar than replica or player issue shirt.

Nowadays, supporter shirts are produced mainly for national teams. In case of club teams manufacturers stopped producing T-shirts. Exceptions can include clubs from Southern Europe like Greece or Turkey. The most surprising example is FC Barcelona. However such shirts are becoming less common.

Undoubtedly big advantage of a supporter shirt is its catalogue price (price proposed by the producer). The price is mostly between 40-50€.

You can also encounter this type of shirt as a stadium shirt/jersey. Its appearance is almost the same as a player issue shirt but has not been produced in the most rigorous standard. Fans don’t sweat like footballers therefore they don’t need a shirt with the highest performance. 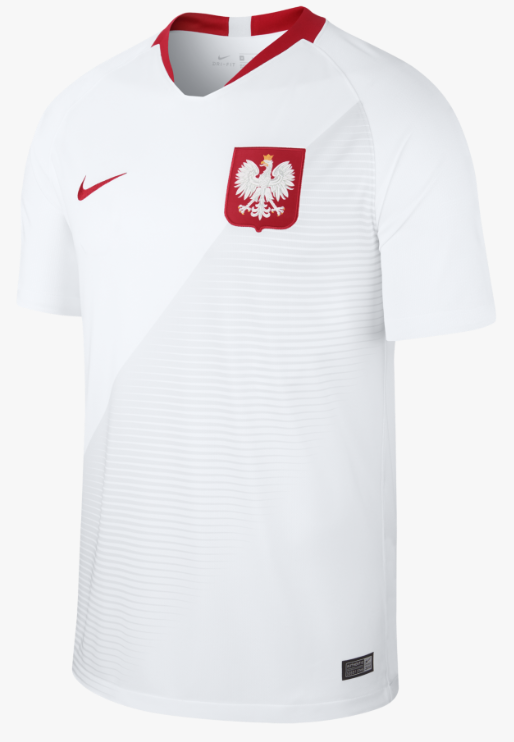 This type of shirt is designed to fully reflect what your idol is wearing on a pitch. It has to have the same pattern and almost identical details. But replica doesn’t need features such as very light material, additional ventilation holes, sometimes transfer heated labels and a lot of another conveniences. Such features are needed by athletes during their maximal effort.

The material of this kind of shirt is always produced in technology designed to improve the comfort of using it. For example Nike makes replicas in Dry-FIT technology and Adidas uses Climalite technology.

It is worth to mention that sizing of a replica shirts is the same as common sports clothing. Supporters needn’t be as slim fit as athletes. If you have a little bit more kilograms than you should have, I strongly recommend to buy a T-shirt or a replica shirt, because player issue shirt could be too tiny for you.

In my opinion replica is a great product. It looks like a shirt in which footballers are playing in matches and is made in a technology increasing comfort of using. Additionally it is available in open commercial sale. These facts make replica the most popular and the most often chosen type of shirts by fans. Catalogue price is 80-100€.

If you want to see how replica shirts look, take a glance at my replicas 🙂

All of my replica shirts from my collection (click!)

It is also known as the authentic shirt. In those shirts the footballers are playing on the pitch. It is the highest and most advanced type of all football shirt types.

A player issue shirt has to manage to the most extreme conditions which could take place on a pitch. One of the most important aspects in this kind of shirts is ventilation. When combined with very light material these shirts can provide fantastic receiving and vaporization of sweat.

To provide the best performance such shirt has to be produced in the most advanced technologies. Material is lighter than in replica and contains a plenty of ventilation holes. For example Poland national team from World Cup 2018 player issue shirt has ventilated chest, back and even… ZIG-ZAG (that is the name of the pattern on sleeves). As you can see the level of advancement of a player issue shirt with comparison to abovementioned shirts is really big.

Of course shirts in which players are running on the pitch have a lot of another conveniences. Examples could be ends of sleeves (more adhering to body), ingredients that make material more elastic (e.g. elastane), transfer heated inner labels in Nike’s and Puma’s shirts or transfer heated Adidas stripes instead of embroidered ones.

Another good instance could be Puma’s player issue shirts produced for World Cup 2006. The majority of shirts, including Poland national team shirts, were assembled with glue. The parts of shirts were not combined by stapling, hence there were no seams.

Player issue shirt is… something more than a shirt!

I could write about player issue shirts for many hours because it is really top product. If somebody wants say this type of shirt is only a piece of material, it’s like calling Mercedes class S or Audi A8 only a piece of metal… What are you supposed to pay for?

I cannot tell you what exactly characterises player issue shirts because it is changing from shirt to shirt. For instance the home shirt of a particular team could have embroidered crest and three Adidas stripes but the away shirt could have both of those elements transfer heated. In this type of shirts there aren’t any dependences between them.

The catalogue price of player issue shirt is mostly between 130-150€.

Are you curious how player issue shirts look? In my collection are a lot of them, check them 😉

Supporter shirt is the cheapest option though its appearance isn’t exactly like shirts in which players are running on the pitch. This type of shirt is often made without advanced technology.

A replica looks like player issue shirt. It is manufactured with technology designed to improve wearing comfort, but doesn’t have as much conveniences as a player issue version.

A player issue shirt is a premium product. It is produced with the most advanced technologies and allows the buyer to wear the same kind of shirt as players of the field. The price in this case is high but you pay for the most recent solutions provided such shirt is available for purchase.

Naturally, you should be aware that this article presents a general and simple division of shirts. In football shirts world there are various hybrids and mixed tricots, for instance a combination of a replica and a player issue. Such shirts have features of both versions but aren’t any of them. Another curiosity is that in small clubs and national teams footballers are playing in replicas because it isn’t profitable to produce player issue shirts with the most advanced technologies. Do you need an example? Legia Warszawa in 2013/14 and 2014/15. On the other hand the biggest teams have special kit room versions of shirts where the sizing is presented as numbers. Examples are all Manchester United shirts produced by Adidas.

What you choose should be your own decision. Personally I’ve decided to collect replicas and player issue shirts because they make a timeline of history that takes place on the pitch. What will you choose?

2 thoughts on “1. Types of football shirts”