You have already learned about the basic division of football shirt types and you are aware of the existence of non-commercial player issue shirts (if not, go to the previous articles 😉

Despite this, when you hear about match issue or match worn shirt it makes you a little bit confused? Then read further, because you are in the right place to get rid of your puzzlement! 😊

Player issue, match issue and match worn are the terms which are often used incorrectly, because only a really small group of people in the world know the proper way to use them. Those are mainly collectors that got that knowledge thanks to experience, because there aren’t books or courses providing the knowledge about football tricots. The only place is the article you are reading right now 😉

These terms are confusing and used the wrong way, because… outside of English, there rarely are their counterparts in other languages! In the majority of them there are no three different terms to describe all of abovementioned types. For example, in my country, Poland, there is only one term to describe all three types – player issue. We don’t have special words to name match issue and match worn. The only way to do it is by description such as “match worn means the shirts that was used by the player in a match”. If you are English, then you are lucky.

You know what kind of shirts are called this way from my previous articles. Those are all shirts made in match technology. They may be commercial or non-commercial or… sometimes may not exist for a particular team. All was described in the first two articles, so if you have any doubts, go ahead and read them again 😊

Match issue means a fully prepared shirt for a particular match. I’ll try to show you by creating a mathematical equation:

You can see match issue is a player issue “plus” some additions. Why did I use quotation marks? At first glance it seems that match issue has got more elements than player issue and… this is confusing, because it isn’t true for all cases. Sometimes one of equation components could have minus sign instead of plus sign or could be divided into several parts – some adding and some subtracting elements, thus it can both add and subtract something. You will see soon enough.

Let’s get a closer look on each of the elements in my equation:

Personalisation – match issue must be personalized. What exactly is personalization? It’s attribution of a shirt to the particular player. The minimal personalization is putting a number on the back of a shirt. Nowadays we are accustomed to a more advanced version that includes player’s name (name, surname or nickname). Sometimes player’s number may be put also on the front side of the shirt , but it mostly takes place on national team shirts. The curious fact is there are special player fonts. The analogy is exactly the same as in the shirt types – there are replicas and player issue versions. It’s often that players on the pitch are wearing a little bit different fonts than an average fan can buy in a shop. Each match issue shirt must be personalized with a match font. Buying font in a shop and putting it on a replica or a commercial player issue shirt never changes it into a match issue.

Badges – each fully prepared shirt should have appropriate badges. Almost all of the competitions have their own badges. European competitions, international tournaments or national games – have you noticed that badge on the shirts’ sleeve depends on the type of the competition? Match issue must have all the badges required by competition regulations. Badges also are divided to replica and player issue versions. For example, Premier League patches has differ diameter – replica 6.5cm and player issue 8cm. 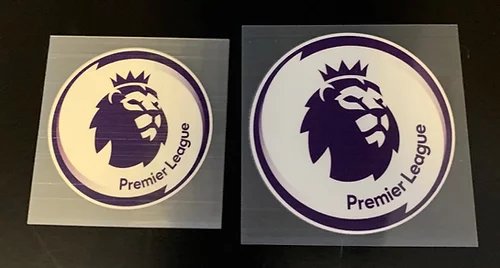 Competition regulations – each type of football competition established its own regulations. For example in English Premier League all clubs must use the same style of font. In Spanish La Liga every club can choose their own font design. In some countries teams are allowed to have sponsor adverts on the left sleeve, in others there are requirements to wear competition’s badge on both sleeves. Sometimes teams can have several sponsors’ logos on a shirt, but from the other side there are competitions where only one sponsor is allowed and even… it’s established how big in square centimeters the logo can be. I could give many more examples, but the most important part is to remember – match issue must meet all regulations of a particular competition. 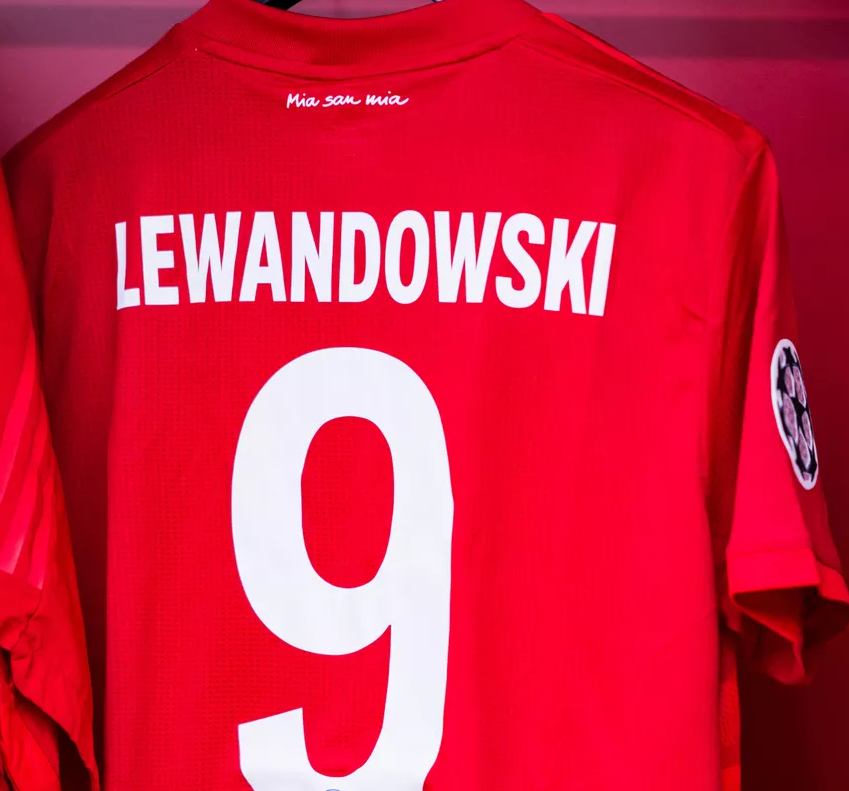 That’s why I used quotation marks with “plus”. There are cases where the regulations are so strict, that shirts lose some elements to meet all the requirements. A few examples to show what I mean. How can you recognize that Lewandowski scored a goal in a Champions League match? UEFA Champions League regulations are very rigorous in case of player equipment – amount of sponsors on a shirt, special marks, names etc. In effect, when Lewandowski plays a match in Champions League, his name is above number 9 on his back, while in national competitions the name is under the number. What is above 9 when Lewandowski scores goals in Bundesliga? The name of the club, which is banned by UEFA regulations.

The similar situation takes place if you consider the amount of sponsors on a shirt. UEFA regulations allow only one sponsor logotype on a shirt, while there are national competitions allowing several sponsor marks on the shirts. A great example always makes things easier – let’s take Serie A and Napoli. In Italian league they have a few sponsors’ marks on a shirt, but in Champions League the only one left on the shirt belongs to their main sponsor, Lete.

Dimensions of sponsors’ logotypes also can differ for each competition. National regulations often allow teams to have quite big logos of their sponsors. European competitions once again are stricter and clearly establish the size of a sponsor logo to 100cm2. Again, I have a cool example for that, because I acquired a non-commercial player issue shirt of Manchester United with smaller than usual AON logo, which was downscaled to meet the Champions League regulations.

When does the player issue transform into match issue? 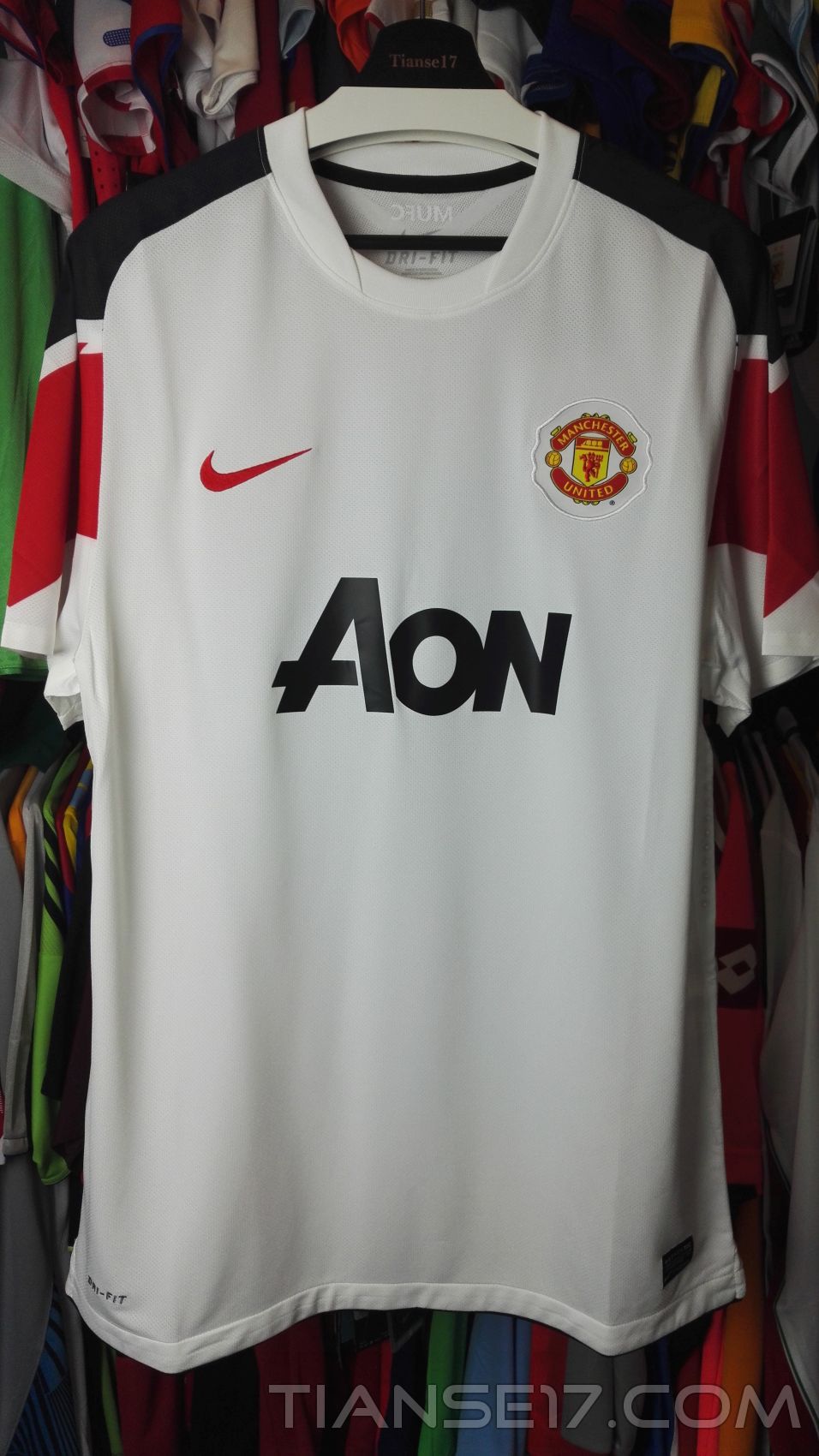 The answer is clear – when ALL the elements from my equation are present . Note the word “all”, because if any element will be (even partially) missing, player issue shirt will not change into match issue. I did just say that match issue means a fully prepared shirt for a particular match, didn’t I?

I just gave you the example of Manchester United shirt. Let’s take a closer look – this shirt meets 2 out of 4 conditions. It’s a non-commercial player issue version that was used by players in matches and has a smaller AON logo to meet UEFA Champions League regulations. But this shirt is still a player issue shirt, not match issue, because there are two conditions not met – there is a lack of both personalization and badges.

Some of you may think – I will just buy #10 Rooney print and a CL badge, transfer it onto this shirt and… done! You are right, but only if you buy the official player issue font and badge, exactly the same as were used by the kit man. If you buy a normal font that was available in the shop at that time (that was used to personalize replicas), your player issue shirt doesn’t change into match issue. You will create a player issue shirt with replica font, not the font such as the one in which Rooney played matches in Champions League.

As you can see, transforming player issue shirt into match issue isn’t simple. I can even say, it’s nearly impossible for an average fan. Despite this, I often see a lot of fraudsters personalizing player issue shirts with the wrong font (or even fake font!) and selling them as match issue, claiming that the shirt was prepared for a player in the club…

There is one more thing. I wrote that match issue is a fully prepared shirt for a particular match. The word “prepared” is of great importance . This word means that the shirt was never used. Player never appeared in this shirt on the pitch, because the kit man has prepared too many shirts for this athlete or the player has spent the whole match on the bench. Both these situations are the main sources of match issue shirts.

It’s simple in English again, harder in other languages, which don’t have any sensible translation of this term. Match worn means a shirt that was used in a match. But not every shirt can be used in a game, right? Each approved  shirt must meet a lot of requirements such as being a special type, being personalized, having badges and meeting all the other competition’s regulations, so… it should be match issue! Let’s go back to maths again and create the next equation:

As you can see, match worn is a match issue shirt used by a player in a match 😊 Let’s notice that match issue cannot be just any shirt from the shop. The shirt must fully meet all the requirements and possess exactly the same features as player shirts used during matches. There is no room for errors. All need to be perfect in 100%.

Life is easier when… you know maths! 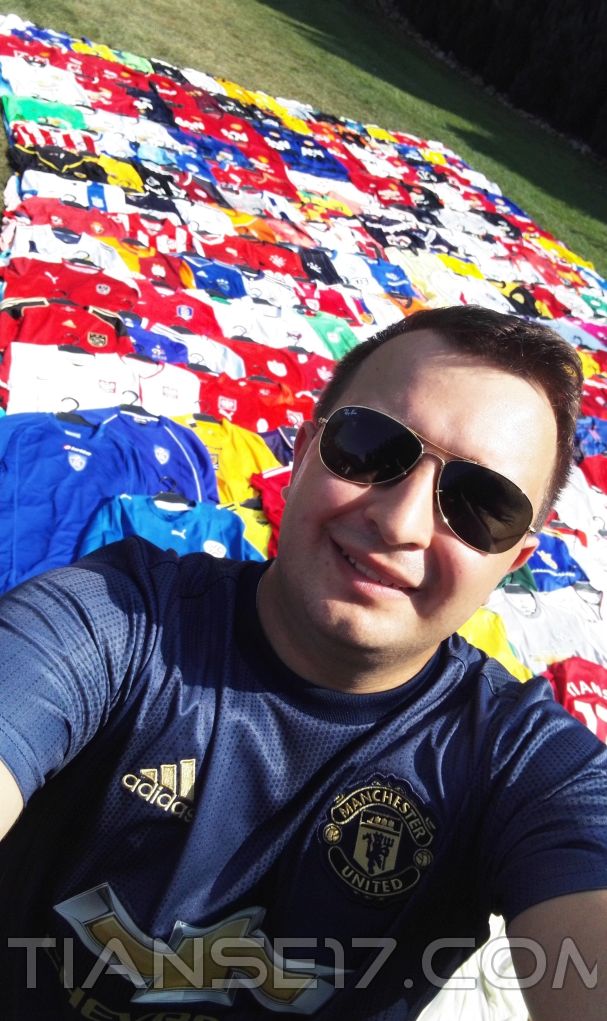 Before reading this article have you ever had feelings that these terms are unclear and problematic? Simple equations are enough to find an easy way of understanding them and remembering the differences. The only problem was the lack of knowledge source, because you will not find this kind of information in any book or a course. Therefore since I’ve decided to create the first place containing shirt’s knowledge, please share it as thanks 😉

In the comments below you can also leave me some information about you and your collection. What kind of shirts do you collect? As you surely know, I’m collecting shirts without personalization, because I want to collect the history of teams, not players Additionally, all of my shirts are new with all the tags attached to keep the history intact and unspoiled. Because of these facts you will not find match worn and match issue shirts in my collection, but there are a lot of player issue shirts and not all of them are commercial ones 😊