Despite the fact that we live in the Internet era, I need to admit there aren’t a lot of pieces of basic information such as exact description and analysis of the definition of catalogue number. We encounter series of characters in every step of our life, in every domain we can think of, but hardly anyone of us knows what a catalogue number is, what it is being used for and why someone has established it.

As a devoted fan of football shirts I will show you what a catalogue number is in… football shirts domain. You will however be able to apply this knowledge also to car parts, electronics or any other domain you can think of.

The only difference will be in the location of catalogue number on a particular product. Finding catalogue number in a football shirt for majority of people is… a really big problem. It  doesn’t surprise me in case of an average person, but when it is problematic for shirt sellers, then the lack of this elementary knowledge should suggest to stop making any transaction with those pseudo-sellers (that often claim to be shops, outlets or collectors on auction portals). If someone cannot find catalogue number in a shirt, then he doesn’t even know what he is selling and also doesn’t know if his shirt is original or fake. Well… is finding catalogue number really that hard? Of course not! It’s a trifle, when you know what are you searching for and where to find it. I will start my article with the first part of the previous sentence.

It is a series of symbols, most often letters and numbers, that is used for unambiguous identification of a product. In football shirts series of characters consist of six to nine symbols. In every domain it could have any amount of characters, from few to over a dozen characters. For instance in automotive industry VIN number consists of 17 characters which unambiguously describe a vehicle.

Catalogue numbers cannot be the same for different products made by one producer, because they cannot produce two different goods and give them the same mark. Each manufactured good receives its unique catalogue number and is permanently connected with it. If this product is modified (which I will show you with Poland shirt from EURO 2012 – an article will be available in a few weeks), catalogue number also should be changed. Why? Because after each modification it isn’t the same product as it was before the changes.

You could and even should ask me – why there are introduced some series of symbols and characters, when you can simply describe every product? It’s a perfect question! For example let’s consider Manchester United home replica in men’s size with shorts sleeves from 2017/18 season which has catalogue number AI6720. Do you see the difference? Instead of writing a very long description what kind of shirt it is, from which season, what size (men/women/youth), short or long sleeves, replica or player issue version, you can write… AI6720. And that’s it. Catalogue number contains in itself all information about a product.

Thus every Manchester United replica home shirt with short sleeves in men’s size from 2017/18 season was made with AI6720 mark. Each original shirt was marked by Adidas with this number. If you find any other number in this model of shirt, you know that such shirt doesn’t have any connection with Adidas and Manchester United. It’s a fake. More information on how to check your shirt you will be able to find in the article “How to spot a fake football shirt?” (the article will be available in a few weeks). To give you other example, the same Man Utd shirt but in player issue version has catalogue number AI6719.

Where producers are placing catalogue numbers?

When you know what catalogue number is and why it was established, it would be good to know where to find it in football shirts. Bad news is that every manufacturer places them in a different spot. Despite this in football shirts there aren’t a lot of places to hide it and I will show you where to find these numbers basing on the biggest manufacturer’s products. It will be enough to find a catalogue number almost in every football shirt (if a producer places it there). 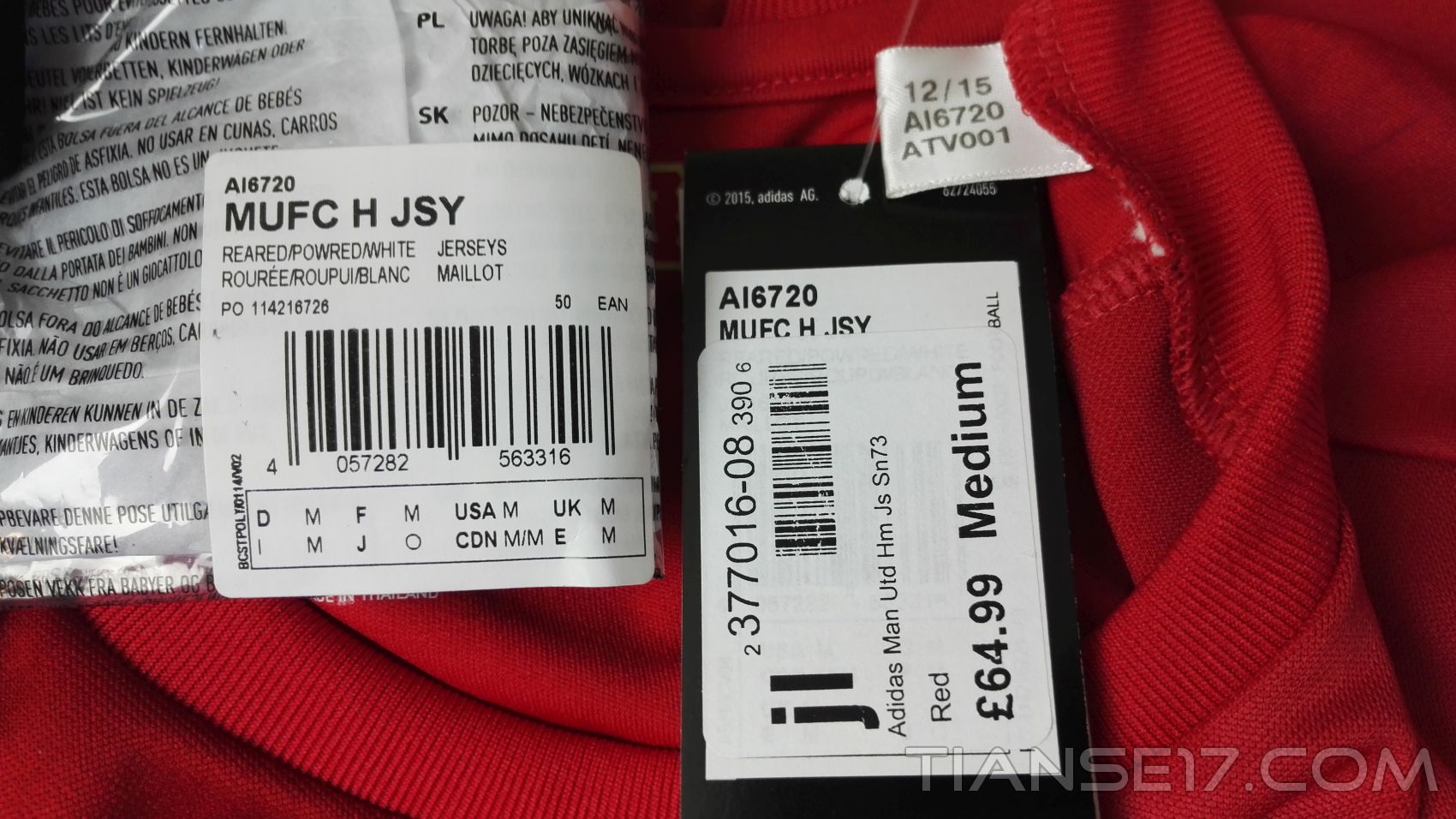 Generally you can find catalogue numbers in three places:

– on the protective foil in which the shirt is packed

– on a paper label attached to a shirt by a strand,

– on a label inside a shirt, mostly located in the collar or in a lower part of the shirt.

I must point out I wrote “can find”, because not every producer, especially a smaller one places catalogue number in each of the abovementioned places. Small companies often skip placing numbers on labels inside shirts and even on protective foils. Big and well known manufacturers like Adidas, Nike or Puma, usually mark theirs product very well and you can find catalogue number in each of the mentioned three places. There are also cases when producers don’t mark their product and you can’t find a catalogue number at all, but those cases are very rare and occur mainly in case of very small producers and even smaller teams. If you aren’t a collector, you will most likely never encounter such a shirt.

Before I show you where to find catalogue numbers I must add you shouldn’t panic when you don’t find a sticker with catalogue number on a protective foil even despite it should be there. Why? Shirts sometimes are taken out and then put back into foils, discounted and then “undiscounted”, transported a lot of times and before they finally get to fans’ hands they could take part in a lot of strange processes. Therefore there could be a situation where foils are lost or damaged and then shirts get new replacement foil on which there isn’t a sticker with catalogue number. It could happen in any one stage of shirt’s way to football supporters – in the factory, during transport, in shops etc. It makes no sense to bother, because it will still be an original foil. The only one difference would be no sticker on the replacement foil. How to spot fake protective foil you will be able to read in the article “How to spot a fake football shirt” (the article will be available soon in Shirts Knowledge section).

Show me where I can find catalogue numbers in football shirts

It’s time to analyze catalogue number spots of the biggest football shirts producers. I don’t favor any one of them so that’s why will look at them in the alphabetical order.

Well known “3 stripes” places catalogue number on a small square label. You can look for this square in two spots – in older models in the lower part of a shirt, and in the collar in more modern shirts.

When you find this label, you need to know how to read it. On the front page there are three rows with different symbols. In this article you are interested in only the middle row, because it is the catalogue number of a shirt. Structure of Adidas’ catalogue number is six digits in older shirts while numbers are gradually replaced by letters in modern shirts.

The American producer is very consistent and keeps placing catalogue numbers on tiny square label which is in the lower part of a shirt (EXCEPTION – if a shirt is player issue version and has heat transfer label, the small tiny square label is/was sometimes skipped).

This beautiful predator keeps placing catalogue number only in one place. And, as like as in Nike’s shirts, catalogue numbers can also be found in the lower part of the shirt.

However finding catalogue number requires one to look at the labels. Depending on a shirt and its age, catalogue number can be found on the long label or on the smaller one sewn underneath the long one. Puma usually likes to inform their customers precisely which symbols located on the label are catalogue number. Thanks to this fact next to symbols you are looking for you can often see “ART. NO” (article number) or “style no.” (style number) annotation.

British producer doesn’t spoil his customers because he often doesn’t place catalogue number on labels inside shirts. The only one place where you can find catalogue number is protective foil or…a paper tag attached to the shirt by a strand.

Why catalogue number is so important?

Of course! It is hard to find a simpler thing, isn’t it? Only one aspect remains – where can I find information what catalogue number should a particular shirt have? I’m not a producer, but a customer, right? Exactly! That’s why this topic will determine my next article. I will show you where and how to find catalogue numbers given particular shirts by producers. I will teach you this in a way that will allow you to find and check catalogue number by yourself 🙂