On 13 January 2019, Real Betis hosted Real Madrid in a common league match. The match was won 2:1 by “The Whites” and would have passed without an echo as is the case with majority of regular league matches, if not for the outfit of both teams. What was so extraordinary? Both teams played in their home kit, which would be nothing special, but  at Real Betis stadium it doesn’t happen often. 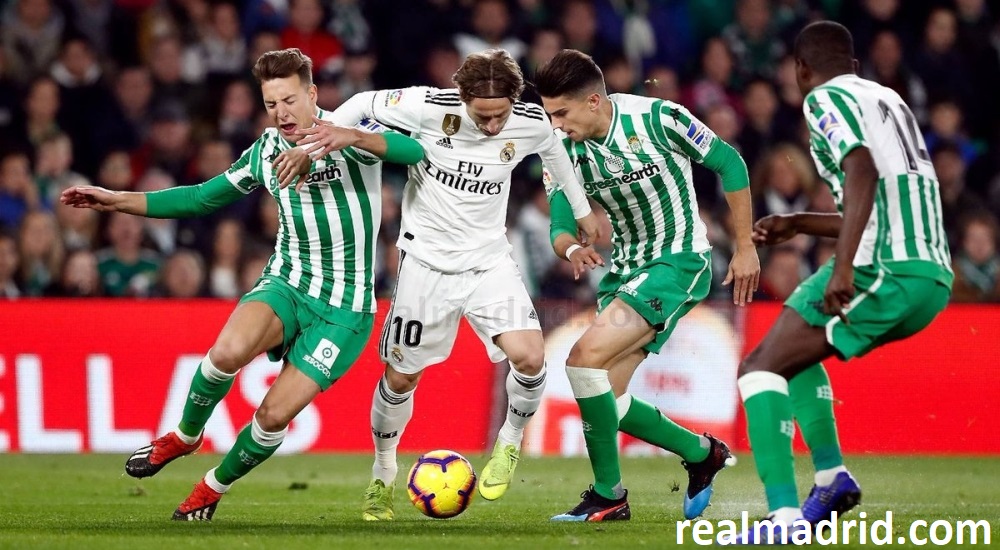 After the match, Marca, the Spanish national daily sport newspaper, shared a very curious observation. Previously the home kit of both teams could be seen at Estadio Benito Villamarín… on 19 December 1960! As a football shirts fan, can I say that it was an ordinary match? Obviously not! Home kits last time were seen at this stadium 59 years ago 🙂

The truth is, not every part of kit was from home outfit… because I have researched a lot of information sources and the majority of them confirm that Real Madrid’s players did use home shirts, but they wore light blue shorts. Therefore it wasn’t as full home kit as in the most recent match. Because of that I can say we were witnesses of a small football shirts history, because I don’t know how many years ago Real Madrid played in full home kit at Real Betis stadium? And if it ever happened?

I need to ask this question – what was the reason for such long absence of Real Madrid home shirt at Estadio Benito Villamarín? The answer is… the home kit of Real Betis. That’s all! Give me likes, subs, thumbs, comments, bells and all that and I will just take what I want. 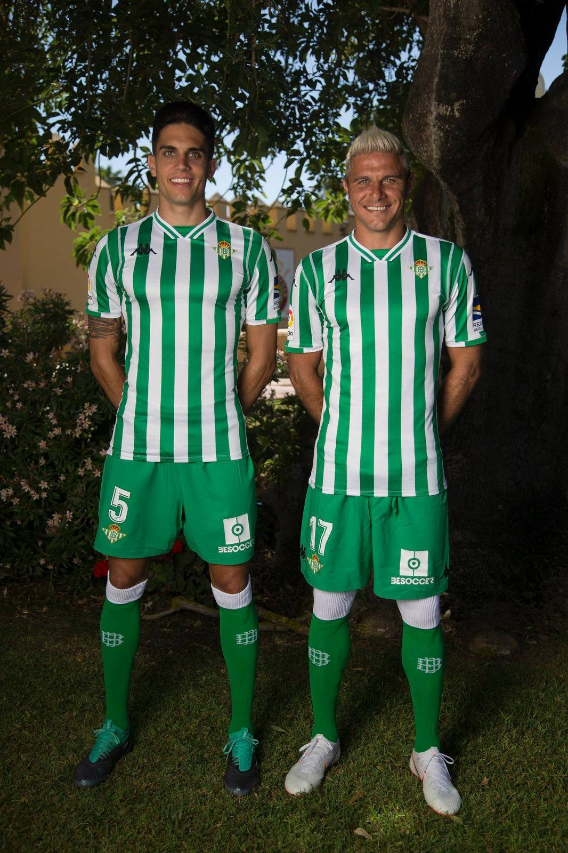 Ok… I wouldn’t be myself if I didn’t explain that. Real Betis home kit consists mainly of two colors which you can see in the club crest – white and green. The most classic and common example of Betis kit is white and green shirt in vertical stripes and white shorts, sometimes including some green elements. A kit designed that way excludes possibility of using all-white Real Madrid kit, but…

There are exceptions to every rule. Betis home shorts are green in 2018/19. Combining it with a lot of green color on the shirt made this kit… more green than white. I can hear you saying – oh man, you reinvented the wheel… However this simple fact is very important from equipment rules point of view. There is a plenty of rules that nobody knows, but there are also rules that define football kit as either “light” or “dark”. Literally. When one team plays match in a “light” kit, then the second team should plays in a “dark” kit.

Obviously, the key word is “should”, isn’t it? You know how it is with rules – there are so many of them to cover every possible case that could happen. When in a match there are two teams playing in light kits, there is a rule which stands that teams must be easy to differ for each other. When it so happens that teams are playing in light kits and don’t differ much for each other, then… it is important that match was played and that’s all. Here you have an example of such a match: Huddersfield Town 1-1 Stoke City in Boxing Day 2017 😛

Back to the topic… Since Real Betis has so much green in their kits during this season, Real Madrid received permission to use all-white home kits which they did. Players ran out onto the pitch in their traditional home kits creating a small football shirts history. For sure they weren’t aware of it. And they never will be unless someone sends them this article 😉

I have to admit I searched through a lot of websites in the Internet to find some visual data from Real Betis – Real Madrid match in 1960. I didn’t find anything. I mean I did find one black and white photo that is thoughtlessly copied and linked by half of the world. The problem of the photo is a man in the central point of it who has a huge Valencia’s crest on his shirt. Whatever, readers are idiots and will never notice this detail, right? The photo itself is very old and black and white. The majority will surely assume that the photo is from the match that was 59 years ago… That’s called journalism reliability not even mentioning the respect for readers.

Instead of this, I found other photos which show Real Betis line-ups from 1960/61. Photos are colored what is very helpful for a typical man who is able to differrentiate only a few colors. On one of the pictures Betis’ players are wearing black shorts. This fact means that already in 1960/61 Real Betis used black shorts with home shirts. 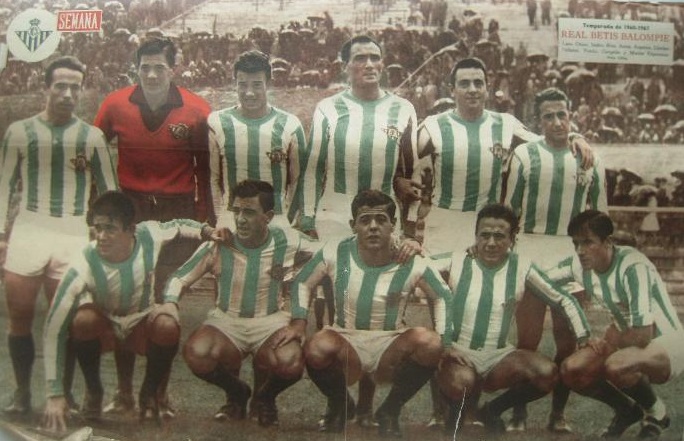 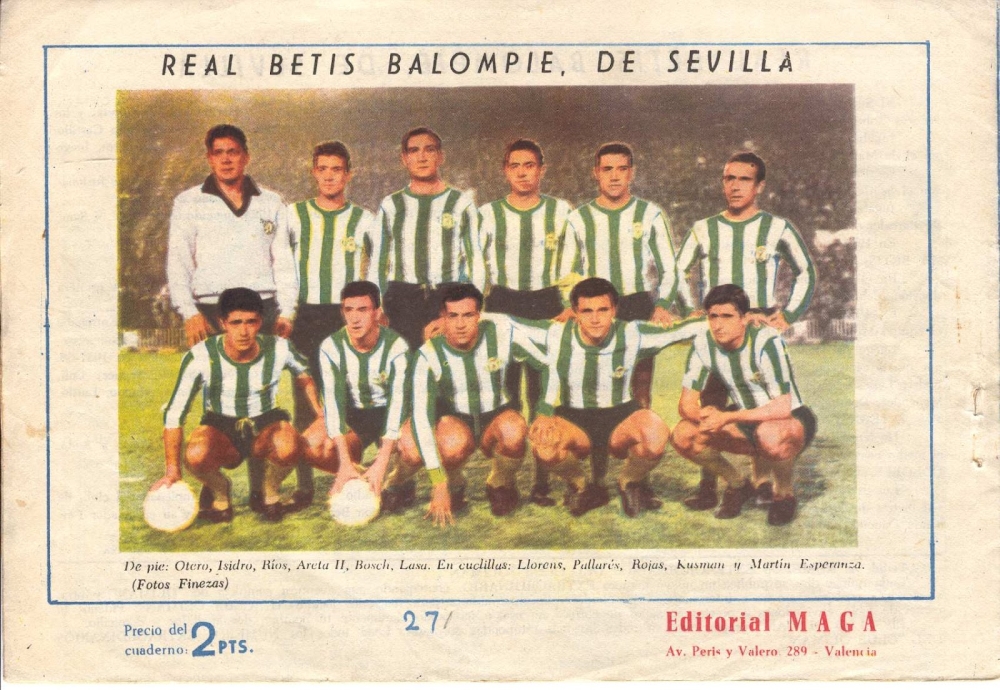 The question remains – what exactly happened in 1960? Real Madrid’s players used home shirts because of sufficient amount of green color in Betis’ shirts, which provided enough difference between players, but…

I envy future generation a little bit. Nowadays almost everything that happens in real world is uploaded to the Internet. If the Internet endures, my grandson will be able to put on a band onto his head and think – show me the match between Real Betis and Real Madrid from January 2019 and then archives from this match will automatically be displayed on his sunglasses. What a pity that I cannot do that and satisfy my curiosity by seeing some visual data from 1960… 🙂